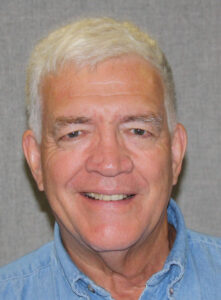 It is interesting to learn how different people come to volunteer at the museum. For Don Tjossem, it started with his interest in naval covers. No, not the Dixie Cup, Combination Cover, or ball caps. A naval cover is any envelope, postcard, or other postal medium that is mailed from or somehow related to a Navy ship, location, or event. Beginning in 1908, post offices were established on board U.S. Navy ships and each ship had one or more postmarks to “cancel” the stamps used on the cover. The postmark, or cancellation, would usually have the ship’s name and the date the cover was cancelled. Also known as ship cachets, there is an organization for collectors of such memorabilia, the Universal Ship Cancellation Society (www.uscs.org).

Don came to be interested in these ship covers during an antiquing excursion with his wife. He found a stash of several covers and found them to be interesting. Collectors can narrow down their collection by date (like Dec 7, 1941), type of ship, or place where the ship was when the item was cancelled. Some of the old covers were hand-drawn and hand-cancelled, back in the days when sailors had plenty of time on their hands when at sea. Don’s collection is an eclectic mix. He started collecting covers that were appealing to him or thought they were interesting.  Now he is especially interested in covers that were cancelled by ships sailing the Yangtze River in China.

Don was born in Lewiston, ID, and moved to Ephrata, WA, when he was in grammar school. He attended Washington State University and graduated with a degree in General Studies, with Sociology and Psychology as specialty areas. He was interested in chemical dependency counselling early on, but practicality dictated that his first job was at a bank, calling on delinquent loan customers. He eventually served 37 years in the banking industry, retiring as Vice President of Key Bank in Gig Harbor. Upon his retirement in 2000, he went back to his first love, chemical dependency counselling. He worked at a correctional facility for five years, and then started his own practice in Key Center. He completed an on-line degree from Capella University while he was working at the correctional facility and received an MS in Human Services. Don lives in Longbranch on the southern tip of the Key Peninsula with his wife of 27 years Becky, and his rescue cat Alice, who is so smart she learned to use her automatic cat box with no training (it is actually a funny story, ask Don about it when you see him!).

Don knew about the museum from when he lived in Poulsbo while working in Bremerton. After his retirement, he decided to check the place out. He has been volunteering as a Museum Attendant and tour guide since 2012. He thinks the museum is an undiscovered jewel that not many people know about. He told a story of a man who worked at the Keyport Base for over 20 years, and finally came to the museum the week he was retiring. Don likes volunteering at the museum because he loves meeting people, working with the staff and volunteers and it is a good social outlet. He is looking forward to the re-opening and being a part of the community once more.

Darlene Iskra has been a volunteer at the U.S. Naval Undersea Museum for 10 years. She started at the front desk as a greeter, and about two years ago she began working in the collections management department, cataloguing collections. She was a naval Surface Warfare Officer and Diving Officer for 21 years, retiring in 2000 as a Commander. She received her PhD at the University of Maryland in 2007, studying the military and society, as well as gender work and family. She started volunteering at the museum to meet new people and give back to the community. She volunteered to talk to museum volunteers in order to learn more about her colleagues and ease some of the loneliness of self-isolation during the COVID-19 pandemic. These “Volunteer Spotlights” are the results of her conversations.