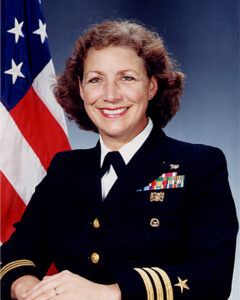 Dr. Darlene Iskra has been volunteering at the U.S. Naval Undersea Museum since 2010, when she moved to Kitsap County. She began volunteering at the museum in order to meet new people and get involved in the local community. Her roles at the museum have included greeting guests at the front desk; cataloging collections and artifacts; and writing articles for the monthly volunteer newsletter. Darlene has a Ph.D. in Sociology and an impressive career during and after her service in the Navy.

Darlene is a retired Navy Diving Officer, who served from 1979 to 2000. She began her diving career after Officer Candidate School, where she volunteered to join the diving program. Being an active swimmer, Darlene passed the diving physical screening test, and was selected to join the program. At the time, as more opportunities were opening up to women in the Armed Forces, she would go on to become one of the first female diving officers in the Navy.

In 1990, Darlene commanded salvage ship USS Opportune (ARS 41), and was the first woman to command a commissioned Navy vessel. Darlene served on four different ships before being selected to command Opportune, something she states is her proudest moment throughout her naval career.

After retiring from the Navy in 2000, Darlene went on to graduate school at the University of Maryland, where she received her Ph.D. in Sociology, specializing in Military Sociology and Gender, Work and Family. She would later work at the University of Maryland directing the leadership program for the Naval Academy. Upon moving to Washington State in 2010, she continued teaching online until retirement. 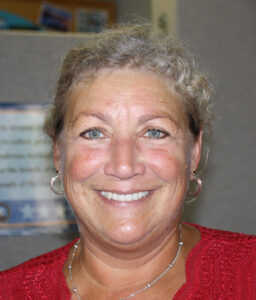 Darlene has an extensive list of post-retirement activities and accomplishments. In 2008, she was inducted into the Women Divers Hall of Fame (https://www.wdhof.org/), and she served on the Board of Directors for a number of years. In 2010, her book Women in the United States Military: A guide to the issues, was published. She serves on the Board of Directors for the Military Officers Association of America, Kitsap chapter. As an ambassador for the Military Women’s Memorial in Washington, D.C., she educates the public about women’s contributions throughout the military’s history.

Darlene greatly appreciates the U.S. Naval Undersea Museum, as she recognizes it as the catalyst to her becoming active in the local community. Her favorite part about volunteering at the museum is working with archival material, as it plays to her strengths as a researcher and sociologist. She also enjoys the camaraderie of the staff and other volunteers.

Rachel Benedict recently joined the volunteer team at the U.S. Naval Undersea Museum and enthusiastically agreed to take on writing the Volunteer Spotlight on Darlene Iskra, who normally writes these posts. Rachel is working on attaining her teaching certification so she can teach Japanese and social studies in Washington State.