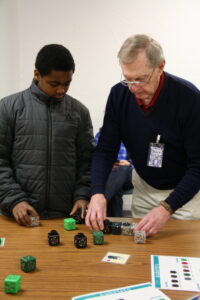 Bruce engages a young learner with the programmable cubes activity during a museum education event.

Bruce graduated from college in 1958 and was at a point in his life where he was not sure what he wanted to do (we have all been there I am sure). He entered Officer Candidate School at Newport, RI, that fall and after four months was commissioned in the U.S. Naval Reserve. His first tour of duty was on the 6th Fleet staff, then stationed on the flagship USS Des Moines (CA 134), a heavy cruiser deployed in Villefranche-sur-Mer (French Riviera, ooh la la). He was a communications watch officer and a crypto watch officer. While on board, the ship visited many ports in the Mediterranean and on the Atlantic Coast to Lisbon. As this was during a tense time in the Cold War, at most of the port visits the uniform for liberty was civilian clothes. But the ship did make port visits to Croatia (then Yugoslavia) at Split and Dubrovnik where they wore their dress uniforms. They also visited Rome, Athens, Beirut, Gibraltar, and other jewels of the Mediterranean. Must have been a very enjoyable tour as a young officer!

After his tour at 6th Fleet, he transferred to the Naval Training Center at San Diego in 1960 to be a recruit training officer. He left the Navy in 1962 and began working for an insurance company in San Diego, specializing in property and liability. Bruce eventually worked with Lloyds of London in high- risk property and liability insurance. Bruce explained that Lloyds does not only insure merchant vessels, but many things you would not think could or would be insured. He told me of a restaurateur in San Diego who had an exceptionally wide handlebar mustache that he insured for $50,000. His restaurant, called Casa di Baffi (House of the Mustache) was an immensely popular place and his mustache was the draw, along with the food of course. The company also insured cargo, bridges, restaurants, and high-end prizes like a $250,000 prize if a horse won three particular races in a season.

Bruce came to the Pacific Northwest when he was asked to manage an office in Seattle. His wife, an operating room nurse, had a skill that transferred to wherever he was sent. Bruce retired when he was 63 and has lived in Poulsbo for the past 27 years. He started volunteering at the U.S. Naval Undersea Museum in 2007 because he liked the Navy, he had time, and he likes meeting and talking to people. He was on the Naval Undersea Museum Foundation Board of Directors for about five years. Bruce also volunteers at the Bloedel Reserve, a local botanical garden, doing similar “meet and greet” of visitors there. In his spare time, he does stained glass, works in his garden, and he loves to read. As a World War II history buff, his project over these past few months of COVID isolation was to read all six volumes of Winston Churchill’s history of World War II. Each of the volumes is about 600 pages. He is halfway through the last volume. Good on you Bruce! 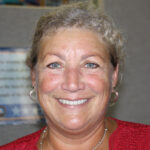 Hi! My name is Darlene Iskra, and I have been a volunteer at the U.S. Naval Undersea Museum (USNUM) for about 10 years. I started at the front desk as a greeter, and about two years ago, I began working for Lorraine in the collections management department, documenting collections that had been acquired, but not fully catalogued. I was in the U.S. Navy as a Surface Warfare Officer and Diving Officer for 21 years, from 1979 until 2000. After I retired, I attended graduate school at the University of Maryland, studying the military and society, as well as gender, work, and family. The combination worked well for me, as I had, and still have, a passion for the personnel issues of work and family in the military. I left Maryland in 2010 and moved to Bremerton, WA, knowing no one but my brother and his family. I chose Bremerton because of the Navy support structure here. I started volunteering at the museum to meet new people and give back to the community. It has been a very fulfilling time for me. I volunteered to talk with museum volunteers in order to learn more about my colleagues and ease some of the loneliness of self-isolation during this pandemic. My first Volunteer Spotlight is Bruce Riggins. I met Bruce very soon after I started volunteering and I have always enjoyed talking to him, but I learned many new things about Bruce, and I hope you do, too.