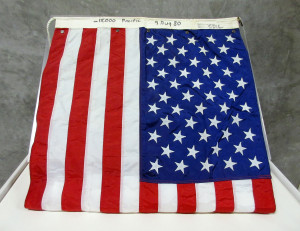 This American flag accompanied Navy submersible Trieste II (DSV 1) on many of its missions. Trieste II (DSV 1) performed undersea research, search, and recovery operations for the Navy from 1965 to 1984. With an operating depth of 20,000 feet, it could reach almost any point in the world’s oceans.

Trieste II was a successor to the original Trieste, designed and built by Swiss physicist and inventor August Piccard in 1952. Both vehicles were bathyscaphes, a type of submersible that has its pressure sphere suspended under a large structural float. The float housed lighter-than-air aviation gasoline, which offset the weight of the pressure sphere to make the vehicle neutrally buoyant. To descend, a Trieste bathyscaphe filled its ballast tanks with water to become heavier; to ascend, it dropped iron pellets to become lighter. 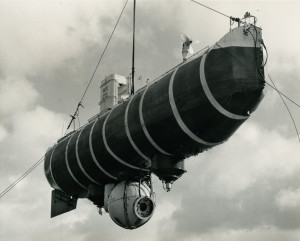 The U.S. Office of Naval Research purchased Piccard’s bathyscaphe Trieste in 1957 and assigned it to the Naval Electronics Laboratory (NEL, now Space and Naval Warfare Systems Center Pacific) in San Diego. It participated in many science and research programs at NEL. The most significant, codenamed Project Nekton, culminated in a record-setting 35,800-foot dive to the deepest part of the world’s oceans, the Challenger Deep, part of the Mariana Trench off Guam. 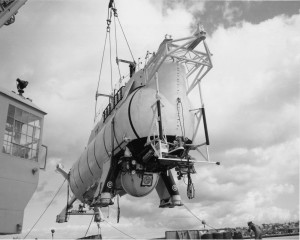 In April 1963, the U.S. Navy lost its most advanced submarine, USS Thresher (SSN 593), in 8,400 feet of water. The accident exposed serious limitations in the Navy’s deep submergence capabilities, prompting the Navy to create the Deep Submergence Systems Project (DSSP) in May 1964 to remedy the deficiencies. Trieste II (DSV 1) was built in 1965 as part of the DSSP’s initiative to develop recovery capability. It carried out many operations for the Navy over its two decades of service, most notably investigating the wreckage of USS Scorpion (SSN 589) in 1969. Trieste II‘s Integral Operating Unit, which included support ship USS White Sands (ARD 2) and support ship tug USS Apache (ATF 67), was a awarded a Navy Unit Commendation for this effort.

Most of the missions Trieste II (DSV 1) carried out were unclassified, but some were not. In August 1980, Trieste II carried out a series of classified dives somewhere in the Pacific Ocean, recorded in the dive log excerpt shown below. One crewmember commemorated the operations by writing the depth and date of the series’ second dive on this flag. 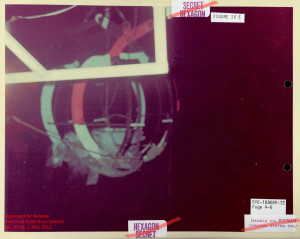 That mission remains classified, but at least one has been declassified: in late 2011, the Central Intelligence Agency (CIA) released details of Trieste II’s recovery of a satellite film capsule from 16,400 feet in 1972.The salvaged capsule, lost during reentry, contained thousands of photographs taken by the American photoreconnaissance satellite HEXAGON — images so valuable the CIA launched a needle-in-a-haystack search operation to find and recover them. For eight months Trieste II painstakingly searched for the missing capsule recovering it on April 26, 1972, earning a Meritorious Unit Citation for performing the deepest ocean recovery ever then attempted.

Trieste II (DSV 1) served as the Navy’s deepest diving submersible through 1984, when it was retired from service. Since 1987, it has been on permanent display here at the U.S. Naval Undersea Museum.

Explore this story further with the following resources: