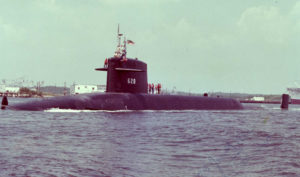 USS Tecumseh (SSBN 628) was a James Madison-class ballistic missile submarine. She was built by the Electric Boat Company in 1962, launched June 22, 1963, and commissioned on May 29, 1964. As an SSBN, Tecumseh was operated by alternating blue and gold crews that conducted strategic deterrent patrols. The crews completed 21 patrols within the submarine’s first five years in commission. In late 1969, Tecumseh underwent a conversion to replace her Polaris missiles with longer-range Poseidon missiles. Twenty-three additional deterrent patrols later, Tecumseh underwent an extensive overhaul from 1977–1979 and a nuclear refueling overhaul 1984–1986. 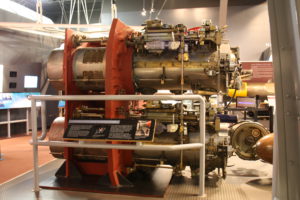 Tecumseh combined crews in late 1991 after the end of the Cold War, having completed 73 strategic deterrent patrols. She spent her remaining time in active service carrying out missions typically assigned to fast attack submarines. Tecumseh was decommissioned in July 1993 and dismantled under the Nuclear Powered Ship and Submarine Recycling Program at the Puget Sound Naval Shipyard in Bremerton, Washington.  In 1994, her two starboard (right) torpedo tubes were transferred to the U.S. Naval Undersea Museum for permanent installation in the museum’s torpedo exhibit gallery.

As a James Madison-class submarine, Tecumseh held four Mark 65 torpedo tubes located in the bow of the submarine. The tubes were situated in vertically-stacked pairs — two tubes each on the port and starboard sides of the torpedo room. They intersected with the submarine’s pressure hull, which maintains the pressure differential between the inside and outside of the submarine, at a point called the forward elliptical bulkhead. 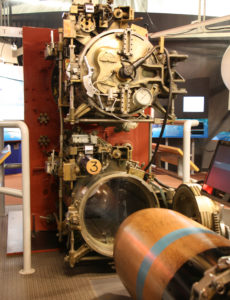 The process of firing a weapon from a torpedo tube begins with verification that the muzzle door is closed and no water is in the tube.  After the tube is hand checked for damage or debris, a torpedo is loaded into the tube and locked into place with a stop bolt mechanism. The breech door is shut and locked and water is blown from the WRT (water round torpedo) tank, which surrounds a section of the tube, to flood it. Tube pressure is equalized with sea pressure and the muzzle door is opened. At this point, the torpedo can be fired — usually electronically through the weapons control panel, but a hand firing key on the torpedo tube can manually fire the weapon if necessary. Most weapons are launched hydraulically through the submarine’s ejection system, but the Mark 65 torpedo tube system also has a swimout capability that allows a weapon to leave the tube under its own power.

After a torpedo has been fired, the tube must be drained by closing the muzzle door and forcing the water inside the tube back into the WRT tank. Once the tube is fully drained and vented, the process of firing a torpedo is complete and the tube is ready to begin the cycle again.