Can you think of a symbol that has immediate meaning for you? Maybe it’s the American flag, the logo of your favorite sports team, or your college mascot. For the men and women of the Submarine Force, it’s the submarine warfare insignia, known informally as submarine “dolphins.” Submariners earn their dolphins by demonstrating vast knowledge of all systems aboard a submarine in a process called qualifying. Qualifying is not just a rite of passage or achievement for submariners, it is a requirement of submarine service — a new non-qual (non-qualified submariner) has a year to successfully complete the qualification process and pass his or her final evaluation board.

(Unfamiliar with qualifying and want to learn more? Read a great first-hand account of what it entails here: http://www.submarinesailor.com/stories/Qualifying.asp.) 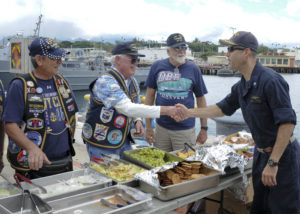 Unsurprisingly, the submarine warfare insignia is considered one of the most difficult to earn in the Navy. The pride submariners feel in qualifying is amplified by the operations the Submarine Force performs. Submarines carry out some of the nation’s most difficult, valuable, and secretive missions. Submariners thus find themselves in the vexing position of having to keep silent about almost every aspect of the work they are so proud to do. Because of this tension, submarine dolphins took on even greater significance and symbolism: they became an unspoken way to communicate the identity, pride, and achievement submariners can rarely share outside the submarine community.

Submarine dolphins have represented submariner identity for so long, it might be surprising to learn the Submarine Force lacked any warfare insignia for the first 24 years it existed. The idea to create one arose in the summer of 1923, when future fleet admiral and Chief of Naval Operations Ernest King (then a captain) suggested developing a symbol to identify qualified submariners. At the Bureau of Navigation’s solicitation, possible designs were proposed by several sources, including one from King himself. Concepts featured elements such as dolphins, submarines depicted from different angles, shields, and sharks.

One of the earliest versions of the submarine warfare insignia, circa the 1920s.

The Bureau hired a firm named Bailey, Banks, and Biddle, out of Philadelphia, Pennsylvania, to create a final design out of the submissions. The firm narrowed the ideas to two designs which were integrated to produce the final emblem: a surfaced O-class submarine flanked by two dolphins resting their heads on the sub’s bow planes. (Dolphins were deemed a fitting symbol twice over: as the supposed patron of Sailors, and because they dive and surface similarly to submarines.) The design became official in March 1924 when it was approved by Acting Secretary of the Navy Theodore Roosevelt Jr. It has undergone only minor changes since its introduction 93 years ago.