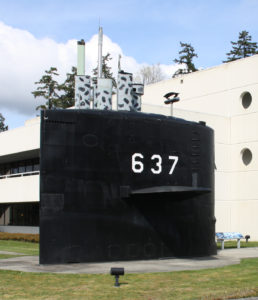 Sail of USS Sturgeon (SSN 637) on display at the museum

USS Sturgeon (SSN 637) served the United States for 27 years in this capacity. Her primary mission was to seek and destroy enemy submarines; she also conducted anti-surface ship warfare, evaluated new tactics and equipment, and supported special warfare operations. The majority of Sturgeon’s Cold War operations were classified. The missions she carried out during these years garnered Sturgeon two Meritorious Unit Citations (1968, 1969) and a Navy Unit Commendation (1970). 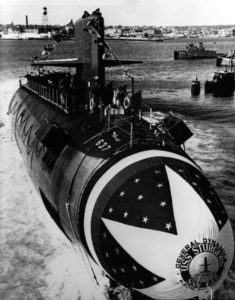 USS Sturgeon was the lead ship in her class of 37 fast attack submarines. The General Dynamics Electric Boat Company built Sturgeon at its shipyard in Groton, Connecticut. Construction began in August 1963 and she was launched on February 26, 1966 and commissioned on March 3, 1967. Sturgeon was 292 feet long, displaced 4,792 tons submerged, and could travel at more than 20 knots.  Upgrades in 1986 and 1988 allowed her to shoot Tomahawk cruise missiles and Mark 48 Advanced Capability (ADCAP) torpedoes.

The design of Sturgeon-class submarines was similar to the Permit class before them. The Sturgeons were longer and improved on flaws found in the Permit design. Most significantly, Sturgeon submarines possessed a larger sail to house intelligence-gathering masts essential to their Cold War reconnaissance operations. The last nine Sturgeon-class submarines in the class were lengthened to allow more space for surveillance equipment and to permit the installation of dry deck shelters that deploy special operations forces and their delivery vehicles. 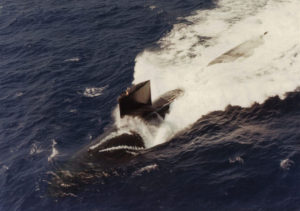 While Sturgeon’s most important missions remain classified, some of the other operations she performed are known. In June 1968, she helped search for USS Scorpion (SSN 589) after the Skipjack-class submarine went down somewhere in the middle of the North Atlantic Ocean. Later that year, Sturgeon helped test and evaluate a new sonar detection device, and in early summer months of 1970 her crew assessed aircraft anti-submarine warfare (ASW) tactics and equipment. In January 1985, Sturgeon provided important SEAL support, completing a record number of Lock Ins and Lock Outs and developing techniques to improve recovery of SEAL teams. While deployed in the Mediterranean Sea in late 1985, Sturgeon developed new operational procedures for the Mark 67 submarine-launched mobile mine (SLMM). In April 1989, Sturgeon transported a congressional delegation to the Arctic Circle and surfaced through ice at the North Pole while participating in ICEX 1989. 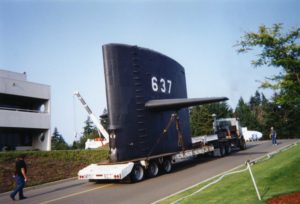 The sail of USS Sturgeon arrives at the U.S. Naval Undersea Museum in August 1995

After 27 years of service, USS Sturgeon was decommissioned on August 1, 1994. She was dismantled at the Puget Sound Naval Shipyard in Bremerton, Washington, through the Nuclear Powered Ship and Submarine Recycling Program. While most of her parts were carefully disposed of or recycled, the sail received a second life when it was brought to the U.S. Naval Undersea Museum in August 1995 for permanent installation.

Sturgeon’s sail is 30 feet long, 18 feet tall, and weighs 55 tons. In addition to housing the submarine’s masts and periscopes, the sail supported fairwater planes used to control depth. These dive planes could also rotate vertically to break through ice when surfacing in Arctic regions.