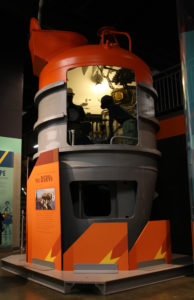 The submarine rescue chamber in the museum’s collection

The submarine rescue chamber (SRC) was developed in the early 1930s to rescue submariners from downed submarines. One was famously used in May 1939 to save 33 men trapped in sunken USS Squalus (SS 192). The Navy continues to own and operate rescue chambers today because their simple design works so effectively and reliably.

Lieutenant Commander Charles “Swede” Momsen conceived the idea for a rescue chamber after USS S-51 (SS 162) was lost in a collision in 1925. Only three of the submarine’s 37 crew members escaped before it sank. In 1926, Momsen proposed the adoption of a diving bell for submarine rescue purposes to the Bureau of Construction and Repair. Then in December 1927, USS S-4 (SS 109) sank off Provincetown, Massachusetts, after being accidentally rammed by a Coast Guard destroyer. S-4’s crew survived the sinking but ran out of air as Navy divers worked desperately to reach them. The incident revived the diving bell project. 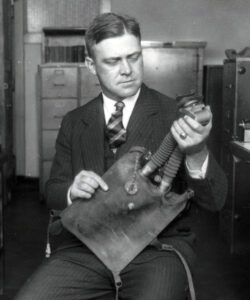 Charles Momsen with a Momsen lung

Under Momsen’s direction, the Bureau of Construction and Repair began developing the diving bell in 1928. After extensive bell testing and experimenting, Momsen was reassigned within the Bureau to design an underwater breathing apparatus for submarine escape — what became his most famous invention, the Momsen lung. The Bureau placed Lieutenant Commander Allan McCann in charge of the design revisions Momsen had planned for the rescue chamber. McCann directed the development of the chamber for a year and a half; once completed in 1930, the bell was introduced by the Navy as the McCann rescue chamber. 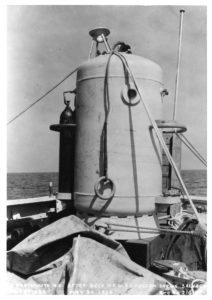 A submarine rescue chamber has been used only once by the U.S. Navy to rescue submariners. On May 23, 1939, USS Squalus flooded and sank off Portsmouth, New Hampshire, after a main engine air induction valve was left open. Twenty-six men in the flooded aft compartments drowned, but 33 of the crew survived in the forward part of the submarine. Charles Momsen led the rescue effort, sending the chamber he invented on four trips to successfully retrieve all the survivors from 243 feet.