Submarine battle flags emerged during World War II as a way of marking the number of enemy ships a submarine sank. The designs and symbols used in these unofficial records varied, as each battle flag was individually sewn by the crew of a particular submarine. Most battle flags included an insignia or logo that represented the submarine. Depictions of the Japanese flag signified the submarine’s kills: military ships were denoted by a rising sun flag while merchant ships were represented by a red circle on a white background. Many flags also recorded other significant events or actions like enemy ships damaged, rescue missions performed, and commendations received. 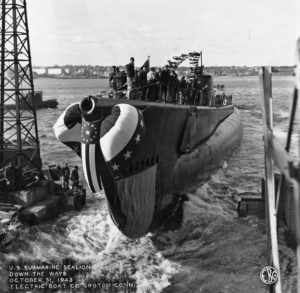 USS Sealion (SS 315) was a Balao-class submarine built by the Electric Boat Company after Japanese forces sunk the first Sealion (SS 195) during their attack on the Cavity Navy Yard in 1941. Sealion II, as she was often called, was launched 31 October 1943 (right) and commissioned on 8 March 1944 with Lieutenant Commander Eli T. Reich as her first skipper. 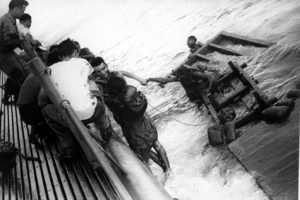 Sealion completed six patrols during World War II, earning five battle stars and a President Unit Citation, the highest award a submarine can receive. While traversing the Luzon Strait on her third patrol, Sealion and submarines USS Growler (SS 215) and USS Pampanito (SS 383) attacked a large convoy of Japanese ships. The American submarines took out four ships and two escorts and then pursued the remnants of the convoy to Hong Kong. Three days later, Pampanito encountered a raft of people and discovered that completely unbeknownst to the Americans, the torpedoed transports had been carrying 1,350 British and Australian prisoners from Singapore to Japan. Sealion and nearby submarines USS Barb (SS 220) and USS Queenfish (SS 393) immediately returned to retrieve survivors. One hundred fifty-nine men were plucked from the water (left), all covered in crude oil and suffering from malnutrition and other diseases. Sealion saved fifty-four men, four of whom died before they could be transferred to an Army hospital in Tanapag Harbor. 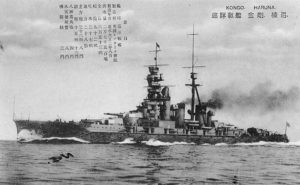 Two months later, Sealion accomplished an incredible feat: the sinking of Japanese battleship Kongo (seen at right). On the night of 21 November 1944, Sealion’s radar picked a large contact 40,000 yards away. Japanese battleships Kongo and Haruna, escorted by two cruisers and three destroyers, were en route back to Japan. Lieutenant Commander Reich made a daring surface attack, firing nine Mark 18 torpedoes at the convoy. Escort destroyer Urakaze was sunk on the spot; Kongo sustained serious damage but tried to flee. Sealion II gave chase and caught up with Kongo a few hours later. As Lieutenant Commander Reich was about to order another attack on the stricken battleship, Kongo exploded and sunk to the East China Sea floor. Sealion holds the distinction of being the only Allied submarine to sink a battleship during World War II. 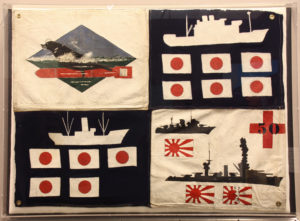 The Sealion battle flag in the collections of the U.S. Naval Undersea Museum records these and other important events from the submarine’s third war patrol. The upper left quadrant contains the submarine’s insignia, a black sea lion riding a red torpedo. The upper right and lower left quadrants depict Japanese merchant ships sunk — six tankers and five freighters, respectively. The submarine’s most significant actions are represented in the lower right quadrant: the large battleship above the broken rising sun flag is Kongo, the smaller battleship with the intact rising sun flag is damaged battleship Haruna, and the number 50 atop the red cross refers to the 50 prisoners of war that Sealion rescued from torpedoed Japanese transport Rakuyo Maru. The crew of Sealion created this battle flag and presented it to Sealion skipper Lieutenant Eli Reich.

After World War II, Sealion was converted to a troop carrier. Her torpedo tubes and forward engines were removed and her forward engine room and after forward and after torpedo rooms were converted to hold up to 123 troops. She was recommissioned on November 2, 1948 with hull designation SSP 315 (later reclassified ASSP 315, then APSS 315, and finally LPSS 315). Sealion was used for training exercises during the Cold War before being decommissioned in February 1970.