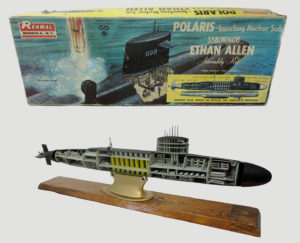 Ethan Allen and her sister SSBNs were the product of the Cold War arms race, a 46-year competition between the United States and Soviet Union to design and build increasingly sophisticated nuclear weapons. Both countries, fearing a nuclear attack from the other, subscribed to a strategy of deterrence: discouraging one’s enemy from making a nuclear attack by amassing nuclear weapons that could be used to retaliate.

The instructions that accompanied the Ethan Allen model kit described the newly commissioned submarine as the “mightiest addition to the Polaris fleet.” Click image to enlarge.

This model kit touted a highly visible technological achievement: the development of new submarines that carried nuclear ballistic missiles to deter a Soviet attack. Because deterrence strategy requires an enemy to know (and fear) your capabilities, promoting the new program helped increase its effectiveness. Marketing model kits like these to consumers also reassured Americans at home of America’s ability to safeguard its citizens.