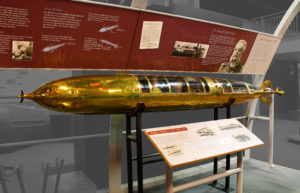 The Howell torpedo in the museum’s collection

The Howell torpedo was the first self-propelled torpedo developed by the United States and used in service in the U.S. Navy. It was powered by a 10,000-rpm flywheel that doubled as a stabilizing gyroscope.

Englishman Robert Whitehead invented the world’s first automobile torpedo, debuting a test model in 1866 before he began selling Whitehead torpedoes to the world’s navies in 1868. The United States initially declined to adopt the Whitehead and instead determined to create its own torpedo. The Naval Torpedo Station was established at Newport, Rhode Island, for this purpose in 1869. The Fish torpedo was not successful, however, and the project ended in 1874. 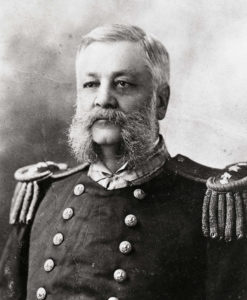 Lieutenant Commander John A. Howell, the head of the Department of Astronomy and Navigation at the U.S. Naval Academy, began developing his locomotive torpedo in 1870. Howell developed key improvements to existing torpedo technology and patented two of them in 1871: (1) propulsion via a heavy flywheel spun before launching, and (2) installation of the flywheel to also function as a gyroscope and directionally stabilize the torpedo. These ingenious engineering features became defining characteristics of the Howell torpedo.

Howell tested his torpedo over the next ten years and produced an improved, working model by 1881. Congress appropriated $100,000 for the development of U.S. torpedoes in 1883 and LCDR Howell competed in a design contest later that year before the Torpedo Board. The other two competitors proposed surface-running, rocket-propelled torpedoes; only Howell’s was recommended for further consideration. The Navy paid for the manufacture of three Howell torpedoes and began extensive testing with them. With successful working prototypes in1886, Howell sold his patent rights to Hotchkiss Ordnance Company in Providence, Rhode Island, in 1888. The Navy ordered 50 Howell torpedoes in 1889, but Hotchkiss spent four years testing the design before finally putting it into production.

Howell’s flywheel was an ingenious method of propulsion. A steam turbine mounted to the torpedo tube spun the 132-pound flywheel to 10,000 rpm, supplying enough stored energy to move the torpedo about 400 yards through the water. As the flywheel slowed, propeller pitch compensated to maintain a constant speed. The Howell could be fired from submerged torpedo tubes or above water with good accuracy at a speed of 26 knots, and could be set to maintain a desired depth and explode upon contact with its target.

By 1898, thirty-five Navy torpedo boats had been commissioned to carry and fire self-propelled torpedoes. Up until this point most had been Howell torpedoes, but the Howell now gave way to Whitehead torpedoes. The U.S. Navy, in fear of being left behind as other countries snapped up the Whitehead, relented and contracted 100 Whitehead Mark 1 torpedoes in 1892. They were put in service in 1895 and, with the relocation of the torpedo tubes below the waterline, supplanted the flywheel-powered Howell by the late 1890s.