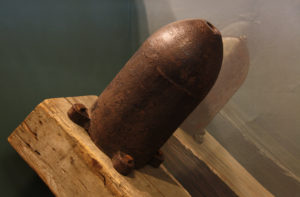 A frame torpedo (mine) on long-term display at the museum

Frame torpedoes were one of the most common, successful types of mines used by the Confederacy during the Civil War. The frame torpedo at the Naval Undersea Museum, here on long-term loan from the Naval History and Heritage Command‘s Curator Branch, was employed by the Confederate Navy for harbor defense at the Battle of Mobile Bay.

Historically, mines have been effective, inexpensive defensive weapons employed by small or weak navies fighting more powerful opponents. The Confederate Navy emphatically demonstrated this point during the Civil War. Inventors like David Bushnell, Robert Fulton, and Samuel Colt had experimented with underwater mines leading up to the war, laying the groundwork for future innovations. They called their devices torpedoes after the eel torpedo that gives an electric shock. During the war, Confederate inventors developed significant advancements in mine technology in an effort to break the Union blockade of the Southern states. Two individuals are most noted for their Civil War-era mine work: Confederate Navy Commander Matthew F. Maury, who created electric underwater mines exploded from the shore through a waterproof cable, and Army Brigadier General Gabriel J. Rains. 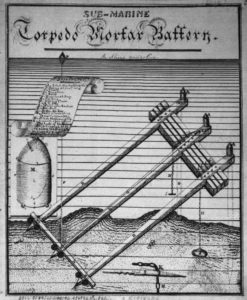 Rains adapted land mines he had used in the Seminole War in the 1840s into two types of mechanical mines: keg mines and frame mines. To make his frame mines, Rains used 400-pound, 15-inch artillery shells cast with thin upper surfaces. A fuse made of gunpowder dissolved in alcohol was screwed into an opening at the shell’s nose. When pressure crushed a thin copper protect cap, an explosive combination of chemicals would activate and ignite the fuse, triggering 27 pounds of gunpowder. The sensitive combination of chemicals was carefully developed and perfected by Rains: 50% potassium chlorate, 30% sulphuret of antimony, and 20% pulverized glass.

Live shells were mounted to timbers attached to large wooden frames or “cribs” that were anchored in rows to the bottom of the waterway, often with heavy stones. The weight system allowed the mines to be raised or lowered by modifying the amount of weight attached. The Confederates placed these frame mine arrangements in harbors and across rivers and bays, just underneath the surface of the water. When a ship passed over them, the contact pressure crushed the mine’s copper cap and ignited its fuse. 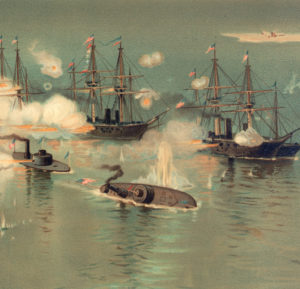 A portion of the painting “Battle of Mobile Bay” by Louis Prang, showing the sinking USS Tecumseh

The formation of two Congress-directed organizations — the Confederate States Submarine Battery Service in the Navy and the Torpedo Bureau in the Army — converted the haphazard distribution of mines into professional services that methodically produced and planted underwater mines.  Standardizing this work for the first time was key to its successful implementation. Frame mines were employed in waterways throughout the South for the majority of the war. While they did not change the outcome over any major battles, they provided important defensive and deterrent capabilities, often delaying Union forces while the Confederates retreated to safety or waited for reinforcements. The Confederate Navy sank 27 Union vessels during the war using underwater weapons. The most dramatic, the rapid sinking of ironclad Tecumseh during the Battle of Mobile Bay, is also the most well-known because of Admiral David Farragut’s famous and often-quoted response: “Damn the torpedoes! Four bells. Captain, go ahead!”