DSRV Mystic at the museum

Deep submergence rescue vehicle (DSRV) Mystic provided rapid-response submarine rescue capability to the U.S. Navy from 1970 to 2008. In the event of a submarine accident, Mystic or her sister submersible Avalon could be deployed rescue survivors anywhere in the world. Although now retired, they remain two of the most technologically advanced submersibles in the world.

DSRV Mystic in the 1970s, shortly after launching

The sinking of the submarine USS Thresher (SSN 593) in April 1963 revealed significant limitations in the Navy’s deep-sea capabilities. The Navy formed the Deep Submergence Systems Project in 1964 to develop a new rescue vehicle. The project produced two highly capable submersibles, Mystic (DSRV 1) and Avalon (DSRV 2), that launched in 1970 and 1971. Following extensive sea trials, they entered full operational status in 1977 and served as the Navy’s primary submarine rescue system through 2008.

The DSRVs had to hover precisely in place, a difficult task given water currents and deep ocean pressure. Engineers developed a special smart-vehicle system — twice as complex as the one that guided Apollo 11’s 1969 moon landing — to control the thrusters and ballast system. The smart system supplied such remarkable maneuverability that the DSRVs could maintain an underwater position with leeway of less than an inch.

Inside each DSRV’s fiberglass hull, three connected spheres made of high-strength steel formed the pressure hull, which protected the crew and rescued personnel from extreme water pressure. The resilient vehicles could operate down to 5,000 feet, well beyond a submarine’s collapse depth. 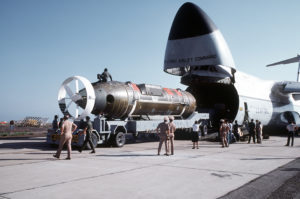 The DSRVs could deploy by sea, air, or land to reach a disabled submarine anywhere in the world within 72 hours. Once on site, a mother submarine or submarine rescue ship carried the DSRV within range of the distressed submarine. The DSRV then attached to the submarine’s escape hatch and transferred stranded personnel back to the support vessel in groups of 24.

Although the Navy conducted numerous practice exercises with the DSRVs, they have never been used for a real rescue operation. No American submarine has sunk since the DSRV program began. 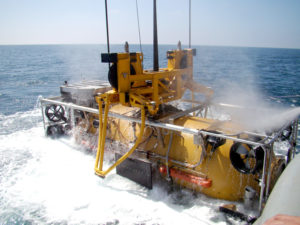 Falcon, the rescue module of the new SRDRS

When the DSRV program came to a close in 2008, the Navy adopted an updated rescue system called the Submarine Rescue Diving and Recompression System (SRDRS). As an easily transportable “fly-away” system, the SRDRS is easier and faster to deploy than DSRVs Mystic and Avalon.

The SRDRS carries out an operation in three parts: