The cold-running Whitehead was the world’s first self-propelled torpedo, and the model from which all future design concepts originated. It was employed by navies throughout the world including — eventually — the U.S. Navy.

The concept for the Whitehead began with Austrian Captain Giovanni Luppis after he acquired the papers of an Austrian Marine Artillery officer who described a small boat of explosives that could be remotely steered into an enemy ship. Luppis adapted the idea to create a primitive floating device driven by a clock mechanism and steered by cables. The Austrian navy declined Luppis’s design citing problems with the propulsion and control systems. 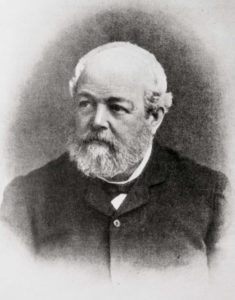 Luppis enlisted the help of Englishman Robert Whitehead, who recognized the great potential of such a weapon and determined to build a working vehicle. Whitehead developed the first experimental model of an automobile torpedo in 1866. Propelled by a two-cylinder, compressed-air engine, this early iteration could travel 200 yards at a speed of 6½ knots. By 1868, Whitehead had refined his design and offered two versions of his torpedo for sale: an 11-foot, 8-inch model with a 40-pound guncotton explosive and a larger, 14-foot model with a 60-pound guncotton explosive. Both performed similarly, running at 8–10 knots with a range of 200 yards. 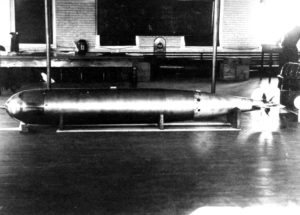 Austria was the first country to show interest in Whitehead’s automobile torpedo and experimented with it from1867 to 1869. Sufficiently impressed with its potential, they purchased manufacturing rights in 1869 but granted Whitehead permission to continue selling torpedoes to other countries. The British Royal Navy purchased some Whiteheads in 1870 and began manufacturing a British version in 1871. Many other countries with significant naval power, including France, German, Italy, Russia, and China, also bought Whitehead torpedoes for their fleets. Robert Whitehead continued to improve his torpedoes, and in 1877, he introduced the MK 2, again in two versions, which traveled faster and farther than the MK 1 models. The two MK 2 torpedoes had similar speeds of 27–28 knots, but the larger 16½-foot-long MK 2 boasted twice the speed of the 11-foot, 8-inch model.

The United States initially declined to use the Whitehead, attempting instead to develop its own torpedo. They established the Naval Torpedo Station (NTS) at Newport, Rhode Island, in 1869 to create such a weapon, but the resulting product was flawed and never left the test stage. Lieutenant Commander John Howell began conceptualizing his automobile torpedo around this time and the U.S. Navy was able to delay using the Whitehead a little longer by placing Howell torpedoes in action in the early 1890s. 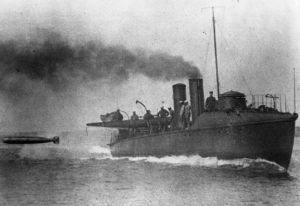 The Whitehead torpedo finally joined the U.S. Navy in 1892 after the E.W. Bliss Company secured manufacturing rights. The Navy, afraid of falling behind as the rest of the world embraced the Whitehead, purchased 100 MK 1 torpedoes in the smaller size. Between 1896 and 1898, the Howell torpedo was phased out and replaced by five types of Whitehead units: MK 1, MK 2, and MK 3 units in 11-foot, 8-inch lengths and the 14-foot MK 1 and MK 2 versions. By the time they entered American service, the MK 1 models performed comparably to the MK 2 and MK 3 Whiteheads — they were faster, traveled further, and carried a larger warhead than Whitehead’s initial vehicles. All five models featured three-cylinder engines, and a gyroscope was added for azimuth control to the larger MK 1 and the MK 3.

The E.W. Bliss Company produced 300 Whitehead units of varying types for the Navy between 1896 and 1904. Together with the Bliss-Leavitt torpedoes that later replaced them, Whiteheads made up the torpedo arsenal for the Navy from 1896 to 1910. They were launched from battleships and torpedo boats and used to conduct anti-surface ship warfare.