The MK 7 Mod 6 swimmer delivery vehicle (SDV) was used by Navy Special Operations Forces (SOF) and Underwater Demolition Teams (UDTs) during the late 1960s and early 1970s, including during the Vietnam War. SDVs are small, free-flooding submersibles that allow the clandestine transport and delivery of special operations forces to insertion points.

The primary advantage of SDVs is their ability to carry swimmers faster, further and with less exertion than is possible in swimming, and their ability to carry greater loads. SDVs evolved from underwater x-craft and chariots developed by the Italians and British during World War II. These early miniature submarines possessed great stealth, could travel further than divers were expected to swim, and carried considerably larger demolition charges. 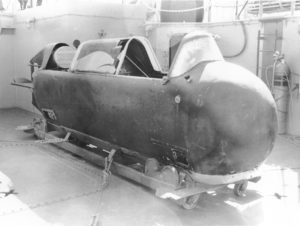 In 1952, the Navy determined the need for a small submersible to transport SOF the final leg from a submarine or vessel to the shore. UDTs and SEALs used the Italian-developed MK 6 Sea Horse vehicle until General Dynamics built the first American-designed SDV, the Convair Model 14. The Naval Coastal Systems Center developed the Convair into the MK 6 SDV, used for training and experimental purposes. The MK 7 Mod 2 SDV was the first American SDV placed into service in the late 1960s. This four-man, flooding vehicle was constructed with a fiberglass hull and nonferrous materials to minimize acoustic and magnetic signatures. It had an operating depth of 500 feet, a weight of 2,200 pounds, and a length of 17 feet, 8 inches. 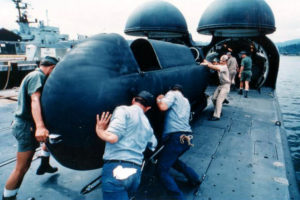 The MK 7 Mod 6 that followed in 1975 was an enhanced version of the Mod 2 that provided improved mission capability by meeting additional weapons payload requirements. It retained the same performance characteristics and essentially the same hull configuration as the Mod 2. The hull was lengthened 18 inches to create additional cargo capability and the nose and bottom afterbody hull contours were revised to fabrication installation of sonar transducers. For improvement of operational safety, capability for emergency blow of the main ballast tank was included. The MK 7 was approved for use and put into service with the SEALs in 1968. 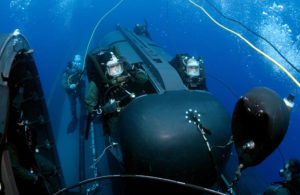 MK 7 SDVs were operated by SEALs during the Vietnam War. Transport submarine USS Grayback (LPSS 574), modified for UDT and SEAL support in 1968, carried and deployed up to four SDVs. In June 1972, a MK 7 SDV was used for the United States’s last prisoner of war (POW) rescue attempt, a secret mission codenamed Operation Thunderhead.

In the mid-1970s, the Navy developed the MK 8 SDV, which became the primary underwater SEAL delivery platform for the next 20 years. In 1995, the MK 8 vehicles underwent a service-life extension program that significantly upgraded their operational capabilities; the upgraded MK 8 vehicles, designated Mod 1, continue to serve the SDV teams today.