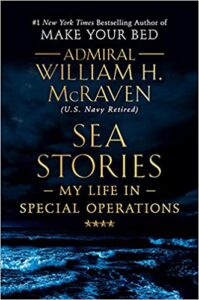 Admiral McRaven’s autobiography about his life as a Navy SEAL is a funny, compelling, and very real history of important events that have happened in our lifetimes: Operation Desert Storm and the capture of Saddam Hussein, the rescue of Captain Richard Phillips from Somali pirates, wars in Afghanistan and Iraq, the operation that subsequently killed and disposed of Osama bin Laden, and many others.

I met McRaven [Bill] and his wife Georgeann many years ago in the mid-1980s. My ex-husband Marc Thomas was his swim buddy during BUD/S and they became lifelong friends (along with a third member of their class, Dan’l Stewart). Both of our families were assigned to the base at Little Creek, Virginia where the east coast SEAL, UDT (Underwater Demolition Team), SDV (SEAL Delivery Vehicle) and Special Boat Units (SBU) teams were stationed. I was aboard USS Grasp (ARS 51) in Service Squadron 8. We would spend the next 10 years in the Little Creek area, rotating between the various commands in our respective squadrons. Bill and Marc’s careers intersected on several occasions through the years.

Marc had always said Bill was destined for greatness, especially after Bill’s Naval Post Graduate thesis regarding SEAL operations and tactics was embraced by the community as prescient. Always modest, Bill does not mention this in the book.

The book begins with his introduction to heroes of his father’s generation of World War II and Korea pilots. His father was in the Air Force, and Bill’s adventures started as he was growing up at various Air Force bases both in Germany and the United States. These alone are laugh-out-loud funny, and provide a preview to Bill’s sense of adventure, daring, and risk taking. Settling in Texas, this becomes his home of record and home for the rest of his life.

He describes the ultimate physical and mental strain of BUD/S training, and we understand how the few men who challenged themselves to the Nth degree, come out of the training with an inner strength and knowledge that if they can survive the training, they can survive anything that they might face in real life operations. “For the next thirty-seven years I would compare every tough situation I was in to the rigors of Hell Week. Throughout the rest of my career, I was never as cold, or wet, or exhausted as I was in Hell Week, and therefore I knew whatever life threw at me, I could make it.” [pg. 56].

In subsequent chapters he discusses his roles in numerous special operations yet always giving credit to others on his team for the success of the missions. He is also humbled by operations where people were killed, and for the grace of God he survived. But as a survivor he describes those ultimate sacrifices as a reminder that they were brave and honorable men, all worthy of a full and prosperous life, and the hope that their sacrifice ultimately saved lives. “…as I rose to the rank of admiral and combat in Iraq and Afghanistan became a daily activity, I thought a lot about Stray 59…With every plan I reviewed and every plan I approved, I asked myself silently whether the risk to the crew and the aircraft were worth the reward.” [pg. 71].

Bill himself had many close encounters with death. The most chilling in the reading was a parachute accident that took place in 2001, during training, indicating that even training evolutions come with significant risk. After jumping out of the airplane, and as the team was falling, he became too close to a teammate who was below Bill. When the other jumper opened his parachute, Bill hit the parachute and went spinning out of control. Bill was hurtling to the ground, and not knowing his altitude he deployed his chute while still spinning. Head down, his legs became tangled in the main risers of his main chute, a set on each leg. When the chute fully deployed it pulled his legs apart, seriously injuring his pelvis, back and legs. He faced the end of his career, but his determination, perseverance and the help and love of his wife, he made a miraculous recovery, serving 13 more years and retiring as a four-star admiral and head of all military special forces.

The book was a pleasure to read, and though Bill had been married for 41 years and had three grown children by the time the book was written, little is known about his family. Yes, the book is about his life as a Navy SEAL, but I kept wondering what Georgeann was doing when he was in Iraq, Afghanistan, and travelling all over the world. A small chapter on Georgann’s sacrifices as a Navy Wife, and especially a Navy SEAL wife, would have been special. Not knowing where or what your husband was doing during those troubling times must have been trying, and I have the utmost respect for Georgann, who kept the home-fires burning so Bill could serve our country.